Nick is a mutt. He split his childhood between the frigid North of Michigan and foothills of the Appalachian Mountains in Northern Georgia. He started attending the Episcopal Church when he was in High School, which influenced his decision to go to Sewanee for his undergraduate studies. There he met his future wife, Leandra Burke, and developed a life-long interest in the outdoors and in the Episcopal Church. After college he became an EMT and worked in Northern Georgia while discerning a call to the priesthood. After getting approved to go to Seminary by the Diocese of Atlanta he attended Virginia Theological Seminary. His first placement was as a Curate (baby priest) at Trinity Episcopal Church in Columbus Georgia. On October 10, 2016 Nick started as the Rector of Christ Episcopal Church.

Nick loves hiking and spending time on rivers with his three dogs, Vanilla Bean, Peanut and Garbanzo. On February 23, 2019 Leandra and Nick welcomed their son, Andrew, into the world. Nick loves to bring Andrew with him pretty much everywhere including bible study and vestry meetings. 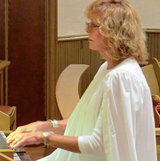 Our Organist and Choirmaster, Lynn Gardner, has served as the “de facto” worship committee in the absence of a full time rector. Lynn is serving her second stint as organist and choirmaster having retired as such after 27 years in 2002. Her extensive knowledge of and experience with the Episcopal liturgy and her respect for the church calendar and tradition results in music which enriches our worship and pays particular attention to festival and holy days.

Deborah Scearce joined Christ Church in August 2014 as Parish Administrator. She has over 30 years of career experience in the Executive Assistant/Administrative field. She is a Patrick Henry Community College graduate with an AAS in both Business Management Technology and Administrative Support Technology and certificates in Office Assisting and Clerical Studies. Deborah and her husband have one daughter and they are Henry County natives.

The Parish Administrator is responsible for the day-to-day operations of the Parish Office and the Church including accounts payable and receivable, balancing accounts and preparing reports, human resources, payroll, answering incoming calls, preparing the weekly bulletins, reporting to the Diocese, updating ACS and assisting with updating the church website among other duties. She is also responsible for giving tours and renting the Parish House for weddings, bridal and baby showers, birthday parties, reunions, meetings, etc. 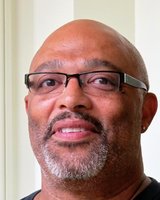 Mark Nibblett joined Christ Church in January 2005 as Sexton.  He is responsible for the day-to-day care and maintenance of our facilities and grounds.

Nursery care is available in the Undercroft (lower level of the Church) each Sunday morning beginning at 9:30 am until the conclusion of the 10:30 am service. During the month of March 2020 the nursery will be moved upstairs in the church due to construction in the undercroft.  You will find the nursery in the vesting room.  Loretta ensures the safety of each child in her care. She feeds and changes the infants. Older children enjoy a snack as well as coloring, crafting, playing and more. Loretta proudly cares for all children in her care with love.

Loretta thanks God for the opportunity to work with small children. She also thanks Christ Episcopal Church for her job of working with the children in the nursery. "God bless the children of the world." -- Loretta

The Diocese of Southwestern Virginia 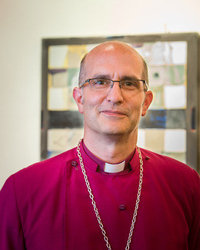 Consecrated the 6th Bishop of the Diocese of Southwestern Virginia on July 20, 2013, Bishop Bourlakas comes to Southwestern Virginia from Christ Church Cathedral in Louisville, Kentucky, where he served as dean. He earned a Bachelor of Arts degree in 1985 and a Doctor of Ministry degree in 2012 from the School of Theology at University of the South in Sewanee, Tennessee; and a Master of Divinity from Seabury Western Theological Seminary in Evanston, Illinois in 1997. Before becoming dean of Christ Church Cathedral in 2007, he served parishes in North Carolina, South Carolina, and Tennessee. He enjoys painting, walking, playing basketball, and watching auto racing. Bishop Mark is married to Martha and they have three daughters. 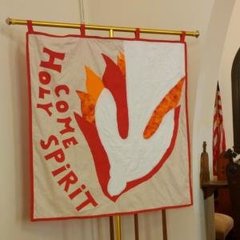 The mission of the church, as stated in the Book of Common Prayer’s catechism (p. 855), is "to restore all people to unity with God and each other in Christ."

The 2012 General Convention established the Anglican Communion Five Marks of Mission as a mission priority framework for the 2013-2015 triennium:

·         To seek to transform unjust structures of society, to challenge violence of every kind and to pursue peace and reconciliation